Finally the end of the rain…

Finally….after an Easter holidays filled with rain and gale force winds…we got a bit of sunshine, it had started yesterday at the farm and seemed to be continuing.  Caitlin even put her shorts on!!!  They got their water pistols that Nan had sent them for Easter and played in the garden.  They must have re-filled them a million times, the kitchen was covered in water, but they had a great time…. 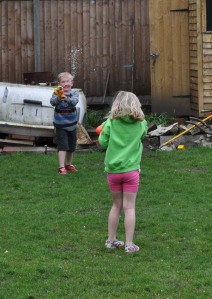 The weather was so good that we went out and bought food for a BBQ tea, but as the day went on it started to get colder and colder and just around tea time it rained so we had BBQ food but cooked and eaten inside!!!  But at least we saw some sun!!