Since Alfie is up and running and we weren’t busy we went along to the VW club….  We’ve been a couple of times before but never managed to go in Alfie!  It was at Sale water park which would have been great for some photos if it weren’t so rainy!  Noah pinched my camera and took some very arty photos!!! 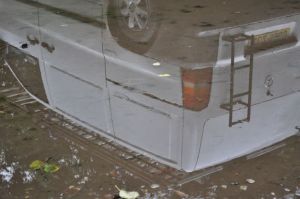 He’s getting really good at taking photos, he’s even mastered zooming in and out!  The rain held off enough for us to talk to some people and to have a wander around the other VW’s

We even might have convinced some other people to join us when we camp in November…if we are brave enough!!!

After Austins tears at going to nursery I have been giving him a sweet, a haribo gold medal, if he’s gone to nursery nicely with no tantrums or tears!!  Austin loves sweets and so they’ve worked really well and he even drew a picture of himself not crying at nursery!!!!!!!  In fact for the past few days I have forgotten to give him his sweet and he has continued to be good!

Today Austin had a swimming lesson at school, it is fantastic…they have a pool in the school and so long as an adult accompanies them they have the chance to go swimming once a week.  I wasn’t too sure if me going in would upset him, or if he would be ok swimming since that also isn’t on his list of favourite activities!!  He quite liked swimming although he was far less confident than he normally is!

So..for now at least….school is ok and he is enjoying it!

Finally it is time for Caitlin’s birthday party.  That’s the trouble with having your birthday in the summer holidays…lots of children’s activities are busy doing holiday clubs or the term time people are on holiday themselves!  Caitlin really wanted a gymnastics party, but she wanted her gymnastics teacher and she wanted to do cartwheels!  I could get hold of a different gymnastics centre but when Caitlin went to a party there they didn’t do cartwheels or the splits so she didn’t want that.  After waiting and waiting I eventually gave up and booked her a build a bear party which was her second choice…then sods law her gymnastics teacher got back to me!!!  All this waiting meant her party was weeks after her actual birthday but I suppose that’s quite good as it spreads the celebration out!!  So armed with 11 friends and 3 friends sisters we went to build a bear!  Richard drew the short straw and had the girls in Jap Taxi which involved Katy Perry on very loudly..over and over again!!  I got my friend’s daughter and the boys (Noah and Austin) and music but not overly loud and not on repeat!

First they all picked their bears….

…and then they queued up to stuff them… 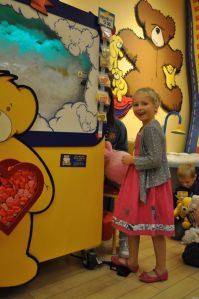 I was a bit disappointed really, I had expected them to play games while they stuffed their bears.  There were 15 of them and only one girl stuffing the bears!! 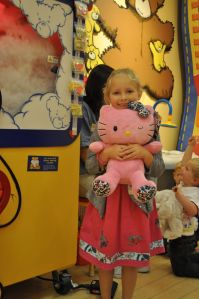 The other girl seemed to be just watching over us and telling Austin off for pressing the sound machine!!  It took quite a while to stuff all of the bears and by the end they were all getting bored. 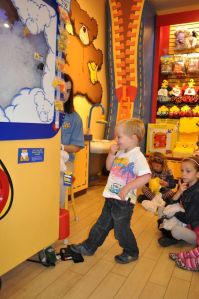 After the stuffing they cleaned their bears, picked an accessory and played a quick game of pirates.  We then took them all for a meal, complete with the famous candle!!

This time it even did sparklers!!!

It was then time to return home…again with “firework” on repeat for Richard, and their own rendition of “celebration” for me…at the very very top of their voices…thanks to the restaurant for playing that during the birthday cake!

For a change it was the turn of me & Richard to get a party invite, although the kids were invited too!  There were a few other kids there and they had a great time playing with them and Caitlin ate a tonne of food!

Noah took charge of my camera and went outside taking photo’s of everyone’s cars where he took some brilliant photos including one where he’d managed to get a relection of the cars number plate in its bonnet!!  He was very impressed with himself!  Noah also dressed himself for the party in a very strange combination of clothes…gradually getting less smart as he went down!!

We didn’t stay too late as Austin and Noah were starting to get tired…so it was off home for us, especially since we have a much more important party tomorrow 🙂

…and so Herman the 2nd is theirs to look after!!!

Off to a wedding…

The rest of the week at nursery went much better.  Austin still looked a little bit teary going in but you could tell he was having a good day and enjoying playing with the others, which was a relief!!

On Saturday me and Richard were off to a wedding so I went to drop the kids off at my Mums.  She had a little birthday party for her and a few people came to give her some presents which included some Hama beads.  She had a go of these in Rainbows and decided she really liked them and so put them on her birthday list. 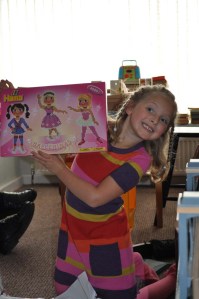 She got lots of other bits and bobs too but the Hama beads were the biggest hit and she sat for hours making the ballerina.  She also had a cake of course! 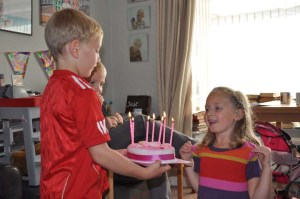 Caitlin was then twirling her new Hama bead case around when the lid fell off and just short of 5000 beads fell all over the floor!  So I helped pick them up and then left them to it!!!!!!!!

This morning since we had the day to ourselves we went to the barn we rent for the rest of the minis and I took my camera along to take some photo’s of the neglected minis!!!!

It was all very dusty and just minis piled on top of each other!!  We really need a house with a garage!!!

Yesterday at nursery did not go well!  I thought it was all going too well….last Thursday and Friday Austin went in brilliantly and had a great time, on Friday he was especially happy because he got a book bag and so now he is just like Caitlin and Noah.   Yesterday however he had the biggest meltdown I have ever seen him do!!  I could hear him screaming from the carpark….and kicking the door!!  It’s weird because Caitlin and Noah have never really been tantrum’ers…they have cried and had their moments but never really a full on tantrum!  The tears lasted a good 20 minutes during which I kept thinking I should go back inside to calm him down but looking back I doubt that would have helped it would have just delayed it.

Today they called me to say he was upset but I had no car because Elvis has failed his MOT and Alfie is in the garage having his MOT…..so I couldn’t go and collect him.  Now I have had time to think about it I’m glad I couldn’t go because I think that would have set a very bad habit going.  In the afternoon I picked up Alfie who had passed his MOT….yippppeeeee….and Richard went for Austin.  You could tell he’d had a bad day but hopefully it’ll be upwards from here!!

The end for Herman

Well…yesterday Herman was 9 days old so we fed him, stirred him and split him up!  I had a queue of people willing to give Herman a home so we took our bowls to school and gave them away to 3 mums….

Today was baking day for Herman!  Caitlin helped to feed him again and mix it up ready for the oven, in her best party dress of course!!  She dressed herself and quite often picks a posh dress for just hanging around the house!

While we waited for Herman to cool we went for a bike ride to the park.  Austin kept doing comedy falls….

….and then we thought he had fallen asleep….. 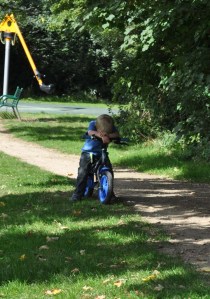 He was really tired but was just kidding!  Then it was time to sample Herman after tea, even Austin had a taste and kind of liked it!! 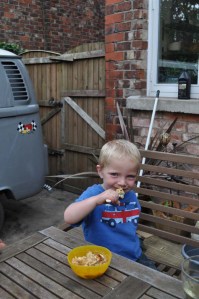 It was very nice, so we told one of our recipients that we’d have Herman back if they needed someone to pass to!

Today Austin starts nursery…..  I can’t believe he is big enough for nursery, he’s nowhere near as capable as Noah was when he started….he can’t write his name yet, he can just about dress himself but it’s a struggle, he’s never really been anywhere without me…  I’m sure he’ll learn to manage but I think it will be a bit of a shock for him at first!  He got dressed into his uniform and I made him a packed lunch….

Richard was on lates so we dropped Caitlin and Noah first and then we both took Austin to nursery.

He went in brilliantly, he just ran in and saw his friend L who I had looked after a bit last year so he knew her really well.  He sat next to L and when I asked if I could go now he said “yes and Daddy too”…so off we went.  We went for a pub lunch and then Richard went off to work.  I went back at 3 to collect Austin and he’d had a good day, he seemed to like nursery and had loved playing with L.

Herman is our German friendship cake…he was delivered to us by Louise and we have to look after him for 10 days and stir him and feed him before baking him!