Yeah yeah…I know this is wearing thin…but another weekend ….another party!!!!!!!!!!!  It was in a soft play and there is a hammock type swing thing which Noah had a great time spinning people in, and being spun in!!

…and then Austin (who’d come along to play with a few of the siblings who are his little friends) joined in the spinning and Noah thought it would be a good idea for them to get in together…. 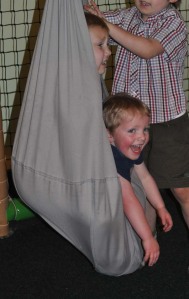 …this was obviously a step too far for Noah and he came out looking a really odd colour and had to sit down for about 10 mins!!!  Austin was completely unfazed by the spinning and went off to the slide with one of his friends….

Noah loved the party once he had recovered from the dizzyness!!  After the party we went on a last minute shopping trip ready for our holiday!!!!!!!!

It was Caitlin’s assembly today!  Richard’s shifts fell right so we all went along.  It was all about fairy tales, mainly the 3 billy goats and the 3 pigs and Caitlin was the mummy goat!!! 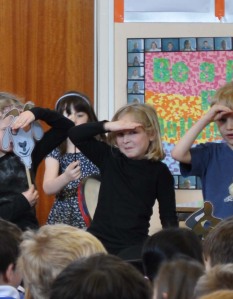 She even had to say a few words…and was really brave and said them pretty clearly!

It seemed quite short in comparison to the other assembly’s but it was just right for the little ones really.  Caitlin was brilliant, she remembered all of her words and did all of the things she was meant to….even if she did wear Austin’s t-shirt to do it (and it didn’t even look small!!)

The gorgeous weather is continuing…but probably not during the holidays but never mind!  So we went to a nearby park which has recently been improved, unfortunately they have made a complete mess of the toddler area and so it was closed to be fixed.  Austin was still quite happy playing in the bigger area… 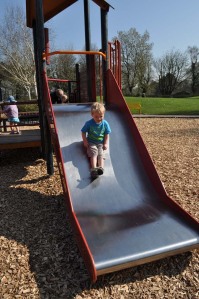 …but he was surprisingly scared of the rope climbing thing…. 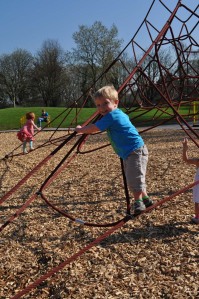 ..and so didn’t really get very high at all, especially for him!!!  We went to see the ducks, although we had forgotten bread (as usual)…. 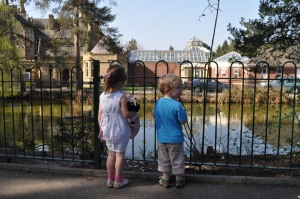 …and Austin had a run around…. 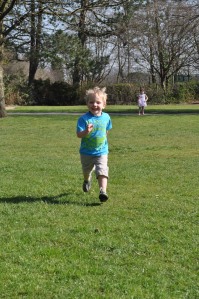 …before we had to head back for dinner and the school run!

Caitlin’s Rainbow group did a Rainbow’s Got Talent for the parents tonight.  Caitlin told me she was doing gymnastics with her friend, when we got there she seemed to be doing it alone…in fact most of the Rainbow’s were doing gymnastics!  There was very little room so she just did a few cartwheels, a hand stand and a forward roll…. 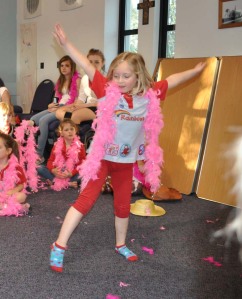 She did really well and was quite a bit braver than some of the girls.  Austin and Noah came along to watch too and they loved watching everyone.  Afterwards all of the Rainbows did a group dance for us and then they played musical statues which Austin and Noah gatecrashed!!! 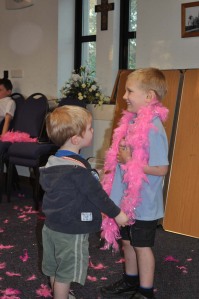 And Noah pinched Caitlin’s feather boa…what was left of it!! They each had one and by the time the did their joint dance there were a lot of feathers on the floor!!!!!!

While we were away!!

While we were in Wales Caitlin had her dance show….  We didn’t get to see it but Nanny, Amy, Noah and Austin went to see it.  It was really hot in the theatre and so Noah fell asleep….Austin was completely fascinated for the entire 2 hours and clapped at every act!!  We’ll have to get the dvd for him as well as us!

On the Sunday Caitlin had to miss day 2 of the show as they had Disney on Ice tickets.  Caitlin and Noah got dressed up, but Austin isn’t keen on fancy dress so he went as himself!

They loved Disney on Ice …there was someone getting flung up onto a pole which seemed to be the most exciting part as they all remembered that!  They had great seats and want to go again!!

This weekend was the Wales weekend…each year we go off with the mini club for a weekend of driving in Wales.  This year we stayed here….. 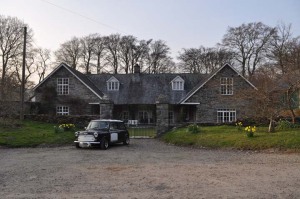 We went driving around the Welsh hills and countryside….

I used to come here at the weekend when I was at school so I love coming back!!!

Afterwards we went back to the house for drinks and a BBQ (well pizza for me and Richard which was good since the BBQ took forever!)

On the Sunday we went to Bala for more driving….

and got some nice photo’s….

We then went to the local go-kart track before we headed home and some of them stayed for an extra night.  The weather was amazing and Elvis held up well considering he hasn’t had much attention over the past year!!!!

Another party…this time for Caitlin, and during the week which is good.  It was at Legoland Discovery Centre, and I’ve heard mixed reviews of it.  With each child there was a free adult place so I jumped at the chance and went along.  They got a slot in the birthday room after a very quick tour of the Lego making “factory” which was a bit rubbish really as I am sure it bears no resemblance what so ever to an actual Lego factory!!!!!!!

After the party tea they were free to wander around the centre.  We went on a Kingdom Quest ride which was in the dark shooting trolls and skeletons…..Caitlin wasn’t too keen on that one, but everyone was going on so she had a go.  We then had a look around the mini village….

There was a 4D cinema so we all went there, it was a car chase and was brilliant….the best 4D film I have seen.  Then we all went on the Merlin’s Apprentice ride which you had to pedal to make it fly, that was good too and we had a few goes each.

Caitlin also had a play in the Lego friends area, I think Lego friends will feature on her birthday list!!!!!!!

Then we went back to the 4D cinema for a different film which was also good, but I preferred the first one.

(Caitlin was tucking her headband under her dress to keep it safe because it didn’t fit on with the 3D glasses!)  Her and her friend Toby, who she was going to marry!, sat on the front row and got quite wet during the 4th dimension part!!  We stayed there for over 3 hours and didn’t really get to do it all, it was brilliant, loads better than I expected.  I’d definitely go back.

We’ve been going to a messy playgroup for a while, but today was its last session as the funding has run out.  It is great, they have all sorts of activities for them to do and Austin has loved it….  This week they had dinosaurs in porridge!!!! 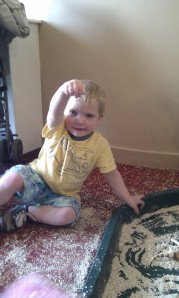 He also gets to paint, glue, play in water and with play dough.  We then walk to school…. 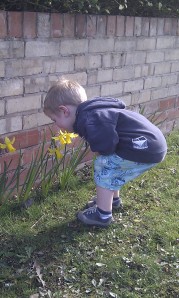 ..but we have loads of time so we can dawdle and stop to watch everything.

Tonight was Caitlin’s summer fair for Rainbows, so we all went along and they each had some money to spend.  Noah spent all of his almost instantly and Austin just copied him!  Caitlin was helping out on the stand for a bit…. 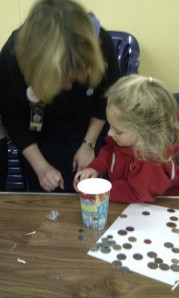 They all had a go on the string pull game…on the end of the string was something chocolatey.  Austin and Noah both won little eggs but Caitlin managed to pick the string with the big boxed egg on it.

They all won sweets on Caitlin’s stand as well and managed to convince a different Rainbows group to sell them all a cake for what little money they had left!!!!!!

Before I took the kids to the party I got some presents….chocolates which we shared after breakfast!!!!!  Socks, ear rings and smellies!  Straight after the party we went for a flying visit to Nanny’s to give her presents.  While we were there we all played Happy Families, which was great…Sunday always used to be game day when we were little and it reminded me of that! 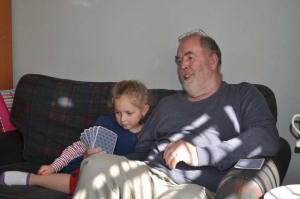 …and I was supposed to be playing with Austin…but he was more interested in stealing strawberries!!!!!!!!!!!!

Just before we had to leave they played out in the front for a while, playing hide the bag!

We then had to head back as we had a table booked for a meal out in a new little Italian near to ours. 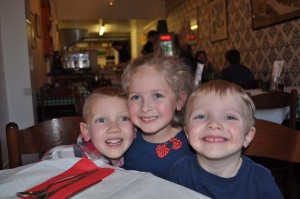 It was really nice, very small and kind of felt like we were on holiday!

For some reason the kids wanted to try our drinks because it was a special occasion…so we let them….as usual Caitlin was not impressed…

Noah actually seemed to really like it and wanted more….no chance!!!!!! 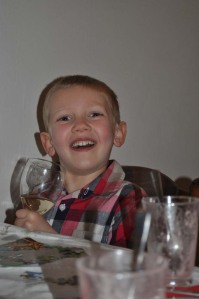 I’m not entirely sure what Austin thought????

We had a brilliant day….with a nice meal even if it did last a bit longer than we thought it would and meant they were a bit later to bed than we’d hoped.