Last Saturday I went on a photography course that I bought with my Christmas money.  It was good but I don’t really feel like I’m any better at taking photos!!  I’ll have to practise more!!  I had a go at taking a picture of the moon but I don’t think my lens is strong enough (if that’s even the right way to phrase it)…

Now I just need to perfect snapping a moving target!!!!!!!

Today was lovely and sunny so Noah put on his football boots (he is seriously in love with them) and went out in the garden to practise his football.

Unfortunately there was a little moving obstacle….

…more unfortunately the obstacle didn’t block the ball as it crashed into my mosaic garden ornament!!!!!!!!!!!!  I think if Noah continues to love football it will not be our last casualty, I just hope the windows survive since we have very old real glass windows!!!!!!  The grass certainly isn’t going to survive…it is destroyed already!!

In the afternoon we went for a pub lunch/tea in a fantastic pub our friends found.  We’ve been twice now..it’s great, there is an indoor play area for kids, but not a soft play type thing, a more varied play area with play stations, puzzles and other bits.  The puddings are amazing, although the main courses are so big it’s hard to fit one in…but you can “cake away”.  Should have taken a photo of the puds actually!!  The cake slices are about 15cm tall….very nice but very sickly!!!!!!!  (It’s http://www.applewoodfarmpub.co.uk/ for anyone local with kids)  Noah got more presents!!!!!!!

He got cars and some football cones….the grass has no chance!!!!!!!!

Finally….after months of teetering on the edge of the swimming pool Austin jumped in on his own!  Every week he balances on the edge and leans over just far enough that he doesn’t fall in and waits for Graham to put one finger out for him to hold, then he jumps in.  I am always really tempted to just give him a little nudge to go in.  I think every mum in the class is willing him to jump…and I have tried bribing him every week..and this week he did it…he jumped!!!!!!!!!!!!!!  Completely by himself.  Everyone cheered and clapped for him it was really funny…he has been so close for so long and he did it…and got his sweets!!!!!!!!!

Out on the bike….

Straight after school Noah went out on his bike…..

It was just starting to rain so we just went around the block.  Which might have been far enough because the seat was just a tiny bit too high and he struggled to stop and get off a bit.  He absolutely loved his bike though, mind you he does love going out on his bike, always has. 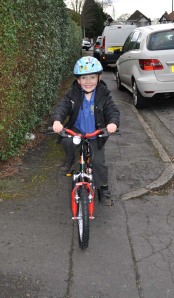 Caitlin isn’t so keen on cycling and so she stayed at home with Richard!!

Noah is 5…..  As usual he has been completely excited to bursting point, with very definite ideas of what he wanted on his birthday list.  He has been counting down the days and sleeps since Christmas!!!!!!!  On his birthday morning Richard was at work so he just opened his presents from my friend Louise…. 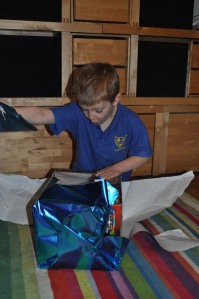 …and his presents from Caitlin and Austin.  They both picked their own presents, Caitlin picked chocolate which went down well and Austin picked a bendy bus…

Noah was very pleased with the bendy bus, it had been on his list which Austin had obviously been paying attention to!  After presents it was time for school where Noah got to wear the birthday hat and got sung to by his class.  After school Caitlin was at gymnastics but we had to do the rest of his presents or we’d have run out of time…..so Noah came home to….

Nan had also posted his presents so he opened them as well…. 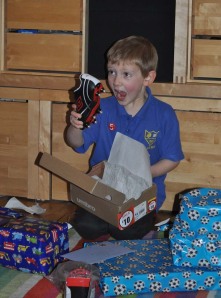 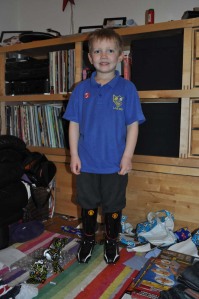 After we had done presents we went to collect Caitlin from gymnastics and went for Noah’s chosen tea of Pizza Hut.  Straight after that we came home as Nanny, Grandad, Amy and Tina were visiting…..with more presents…. “football clothes” as Noah calls them, to go with the boots and pads….

He got a Liverpool kit and a Manchester United kit…..he wore the Liverpool kit to bed!!!!!!  Also on his birthday list was a real guitar like his teacher has at school, which Tina and David bought for him…..

…again he was very impressed with that too….

After the presents there was just time for his cake……

He had one of our regular candles…the big flower exploding candle!! 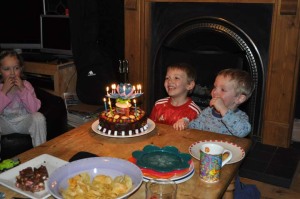 …for some reason I put normal candles on the cake as well….I don’t normally do that, and now I know why…..it caught fire!!!!!!!!!!  The normal candles set fire to the big fancy singing flower candle….

Once we had salvaged the very waxy cake and aired the living room we all had a quick piece of cake before it was off to bed (in his Liverpool kit) since it was school in the morning.  I think Noah enjoyed his birthday, he got loads of great presents and had a very full day.  His favourite present remained the bendy bus…his last bendy bus got broken, but this one was an improved model that actually bends!!!!!!  Good choice Austin!  But judging by the excitement on his face (he is always so expressive) when he opened them he loved all of his presents!!!!!!!!!

Caitlin’s top tooth has been wobbly for months…way before Christmas!!  Finally at lunch time it fell out…..

Every time I look at her I just think she looks really really odd!!!!!!!!!  The other top front tooth is also wobbly and is sticking down further than it was so that also adds to the odd look!!  I just hope her new top teeth are as straight as the bottom big teeth she has grown, they are perfectly straight and look great.  Until then we will just have a gappy Caitlin in the photos!!!!!

Caitlin and Noah have joined an after school club called Mad Science.  It’s quite pricey but we decided they could go, I especially thought they should go with it being science-y!!  Really Noah is probably a little bit young to fully appreciate it, but Caitlin already does quite a lot after school so it didn’t seem right to send her to something else and Noah to miss out again.  It’s a one-off course so a one-off payment!!

So far they have learnt all about light and came home with a black light and black light pen along with some toy money to add a mark to that would show up under the black light.  Each week they get something to bring home which is part the cost.  They have also learnt about chemicals, although from their descriptions I’m not certain exactly what they learnt about the chemicals!  That week they got a beaker to bring home and a tongue, hair and stickers to decorate it with…. 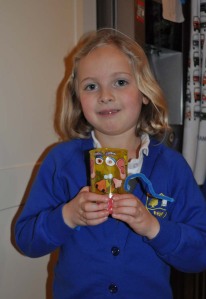 They had a week were they brought aeroplanes home to make… 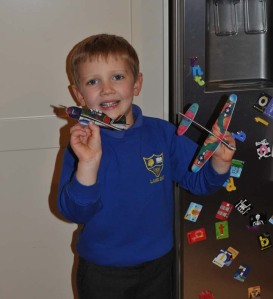 This week they have come home with worms!!!!!!!!  They have to feed them and look after them for a few days and then release them out into the garden!  They forgot all about the worms by day 2 so I am glad we don’t have any pets!!!!!!!!!!!! 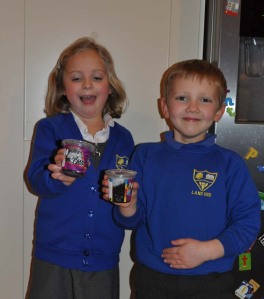 They seem to be really enjoying the sessions and have learnt quite a bit.

Our pine-cake Tuesday (as Noah kept calling it!) started with an early birthday cake for Noah…

O & A were around after school so the cake was more for them really…and I forgot to get non-pink candles…but Noah loved it.

For tea we had savory pancakes with bacon and cheese…..

They went down very well with Caitlin and Noah…. 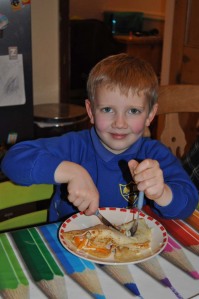 Austin, as usual, was very reluctant to even try the savoury pancake, but eventually did and kind of liked it… 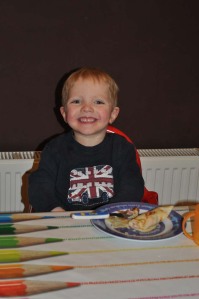 …then when we gave him a sugar and lemon pancake he reacted as if we’d poisoned him!!  And then when we got him to have another bite (for the camera since his first reaction was so funny) he was almost sick!!!!!!

Another weekend …..another..yep you guessed it THREE parties!!

Three more parties….(2 of them joint ones…so 5 presents)  This weekend though it was the turn of Austin to have the most invites..but Noah still had one…and poor Caitlin none again!!  Austin’s parties were back to back so we set off with the 3 presents so we could go straight to the next one.  The first one was the little sister of one of Caitlin’s friends who we play with on a Friday morning.  I really wish I had taken Caitlin along because M really missed her.  I’d left Caitlin because I was going to 2 parties and Richard just the 1 so thought it would be best for her to gate crash just the 1….

L’s party was in a church hall where I used to go to playgroup with Caitlin when she was a baby..it was really odd being back.  It was a great party, really simple, just loads of toys out for them to play with, a bit of party food…

While we were at this party Richard set off to Noah’s friends party.  It was fancy dress so Noah went as a pirate….

I couldn’t decide if Caitlin should get dressed up too since she wasn’t actually invited but in the end we said she could….so she went as Tinkerbell

Richard wasn’t too impressed because he got roped into being a laughing policeman!!!  But he survived!

Austin’s next party started at the same time his first party ended, and it was about 8 miles away so we had to leave a bit early from the first party.  The second party was for a set of twins he is friends with.  They had a sensory party which was great too!!  I am going to make Austin’s party a combination of both of today’s parties!!  Again they had loads of toys out which they played with…

…then they played pass the parcel, but because they were little rather than getting the parcel when the music stopped, you got it when your name was on it!!  It was a great idea and meant everyone got a turn without worrying about missing someone…I’ll definitely be pinching that idea!! 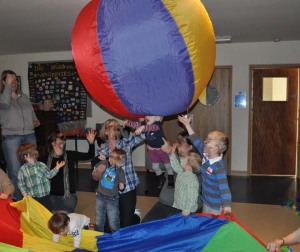 I got a bit carried away with blurring out the other people and blurred Austin as well…but it was more a photo for the giant ball rather than a good picture of Austin!!!!!!

Finally the mammoth party Sunday was over…but there are still more parties to come!!!!!!!!!!!

Visit to Nanny and Grandad’s

On Thursday the kids went to Nanny’s for a couple of days to say Happy Birthday to my Aunty and just for a visit.  While they were there they went to something called Wild Flowers (or something like that) and made clay models…..

Austin made some cool little people…. 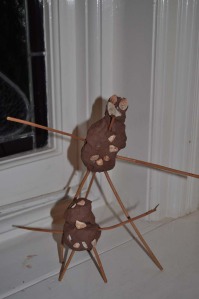 I’m not sure how much help he had, but they are brilliant!!

Noah made a cow….

While taking the photo of Noah with his models I discovered they are very delicate and could do with glueing as Noah’s completely fell apart, and then Austin’s did!  I’ll have to glue them and put them somewhere safe!!!