Finally..I have finished the seats in Alfie!  We bought the vinyl a while back and I have been doing bits on them while the kids are in bed or at school.  We are due to go away in Alfie soon so I finished off the last bits.  It was really hard sewing the piping in…the vinyl itself was bad enough but an extra layer was very hard work! 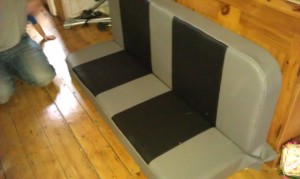 …just need Richard to fit them now and then we’ll be all ready for a summer of camping!!!

We quite often have crazy busy weekends but I think this one was even crazy by our standards!

It started off with the Beavers bingo night on the Friday.  Richard was at work so I took the kids….it was chaotic!!  They had an electronic number caller and it was impossible to understand it!  Somehow Austin’s ticket managed to win and he got 2 Easter eggs which we shared out with our table.  Straight after the bingo night I went out for a friends 40th birthday celebrations!

On the Saturday was Austin’s school fair and I was manning the craft table with Austin’s help.  When Caitlin and Noah arrived they all got some money to spend and they all painted a plant pot…

Noah spent the rest of his money on the football stand where you could try to score a goal, every time you scored a goal you got some sweets.  Austin really wanted to buy a ride on car but it was up for auction and he really didn’t understand that.

Straight after the fair Caitlin had a roller blading party which they all loved! 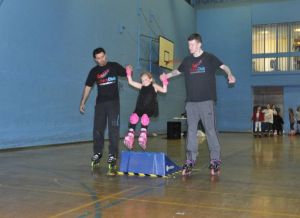 I even got to have a go at rollerblading too…it was surprisingly easy!!

After rollerblading it was straight onto another party..this time it was night 2 of my friends 40th, but this time a party at her house with the kids!  They all had a great time running around the garden, playing football and on the trampoline.  Once it started to get too dark and cold the kids went inside where Caitlin got her make up done by some of the older girls… 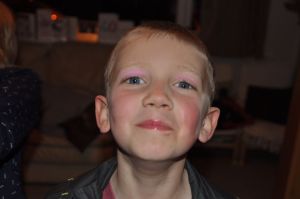 On Sunday Caitlin had another party, a cupcake decorating party this time! 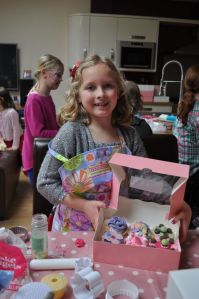 They all loved decorating the cakes and actually did a great job!  The lady doing the party had loads of gadgets and loads of sweets and other toppings.  The party went on for quite a while because they were all having such a good time, but in the end we had to rush off because we had a 21st to go to as well!!

The 21st was bowling so we took the kids along since they love bowling!

By the end of the night they were all knackered after such a busy weekend!

Caitlin’s class did an assembly on water and the weather.  Recently they had been on an inter school singing event and so the assembly was to show us what they had done.  They sang lots of water related songs and Caitlin was a sunbeam!!!!!! 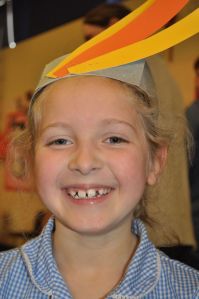 We didn’t have any plans for the weekend so we decided to go to the Sandbach totally transport with some friends.  It was forecast to rain in the afternoon so we thought we’d get there early and dive into a pub for some drinks if it started raining! 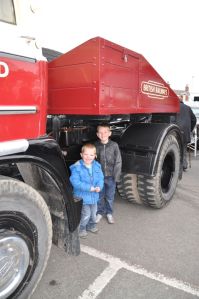 We had a wander around the trucks and other commercial vehicles then we tried to do the fire station quiz, which was really hard!  We had to find numbered cards but they were all over the town!  We found enough to win them all a packet of sweets so they were all happy.  It started to drizzle but we had promised the kids a go on some of the rides so Austin went on the flying rockets while Caitlin and Noah did somersaults on the trampolines… 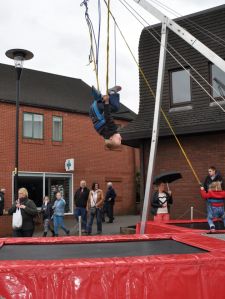 ..they then all decided to go on hook-a-duck….

One of the prize choices were fish!!!!!  My Godson’s dad said he could try to win a fish and I did agree that winning a fairground fish was something every child should do…but nope ours weren’t getting one!  Richard seemed very keen on the fish so we agreed that Richard could let them have fish as long as he took FULL responsibility for making sure the fish were looked after…..so we won 2 fish….

Austin didn’t want a fish at first, he wanted a bow and arrow which he was not getting!  I could see where that one was going….an arrow in the eye for Caitlin..so no dangerous toys!  He then spent ages deciding and also picked a fish!  We then found a pet shop and bought our fish a tank!  H also got a fish, which he called Jeff, and we went for a drink with our fish!!!!!!!!!!!  Where we took bets on who’s fish would live the longest!  I gave Caitlin’s a matter of days, Austin’s a week or so along with H’s and I predicted we’d still be lumbered with Noah’s when he’d left home!!!!!!!!!! 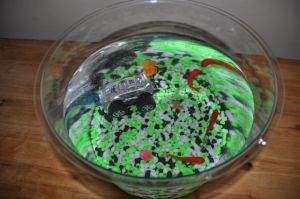 Caitlin decided to call her fish Eve.  Hers has a long tail…

Noah called his Adam…he has lots of things called Adam!!  His has a really short tail….

Austin…very imaginatively….called his Austin!!!!!!!!!!!!!!!  His also has a long tail but has some silvery markings on.

Richard was busy and the weather looked ok so I decided to take the kids to the big white head!!  It’s ages since we’ve been there and they are constantly asking to go!  I needed to go to Ikea to get bits to finish the seats in Alfie so I thought we could combine the two.  Just as we were setting off some friends called to see what we were up to so we arranged to meet there with their kids.  The big white head is a big sculpture called Dream…..there really isn’t much else there except the sculpture and a bit of a walk, but they all love it! 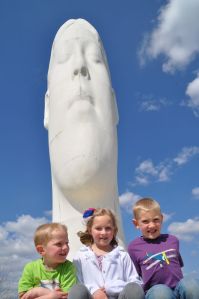 Dream is right by the motorway and surrounded by power stations, but I got some nice photos…

We ate our picnic by the sculpture and then had a play around jumping down the steps!!!

When Austin started to get a bit too brave we moved on and then walked around to the little pond, where they found sticks to balance on their heads!!

…we then stopped to feed my friends baby and the kids and John found some reeds that disintegrated into a mass of fluff and had a fantastic time sending the fluff flying everywhere!!!!!!!

The weather was loads better than we thought it would be and so we went home very pink and tired!!!  It was a brilliant unplanned day.

School had a family fun night but Richard was working so we went along and joined forces with another family!  Austin was hilarious…well at least everyone else thought he was hilarious!!  Every time we discussed an answer he shouted it out as loud as he could!!!!!!!!!  We weren’t doing brilliantly anyway but by the time Austin had announced any answers that the others might not have got themselves we were doomed!!!!  I don’t think we came last but we certainly didn’t win…but the kids had a great time especially Noah since we were with his best friend.

I entered a competition and won an ipod case!  I decided to let Caitlin pick which one we should get…and she picked this one….

We let https://www.facebook.com/OhSewDinky know which one she wanted and a couple of days later it arrived.  Caitlin was very impressed with her prize 🙂

3 kids and 6 and a half minis
Blog at WordPress.com.