….so the tooth fairy came and she brought 2 Euros!!  Caitlin was very impressed.  After breakfast we asked what they all wanted to do and it was swimming that won again!  They were loving being in the pool all the time!

They both had their flippers and mask or goggles on constantly and were jumping in and swimming around, racing each other around the pool….

We all tried our best to get Austin to jump in but he wasn’t having any of it and just stood shaking on the side.

After swimming we went back to the room for a siesta, when I looked up from my book I spotted Caitlin and Noah snuggled up with Caitlin reading her book to Noah!!! 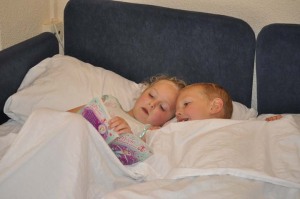 It was then time for tea and then the entertainment.  We played bingo again…and didn’t win again!  Austin was funny he kept saying “if you win you get prizes if you don’t you don’t” in his really matter of fact voice!  Noah kept getting really upset that one of us (probably just him really) hadn’t won….so once bingo was over I carried it on until one of our tickets won and he seemed happy at that! 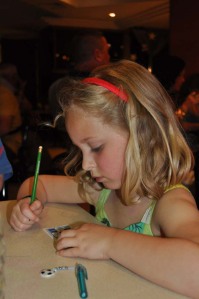 After the bingo there was a parrot show which they absolutely loved (except Noah who had fallen fast asleep!) 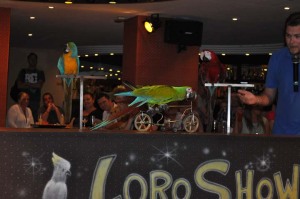 After the show we went back to the room to bed.  Austin is a funny soul…he is really set in his ways and had obviously decided that the single bed in the room was his.  Caitlin and Noah think it’s really exciting to swap beds all the time…either having a sleep over in the other ones bed or camping out on the floor in each others rooms, we always ask Austin if he wants to join in and he always very definitely says no!  Tonight Caitlin fancied testing out the single bed, but Austin was refusing to go in the sofa bed with Noah (who was still asleep and now in the sofa bed).  They were both tired and Caitlin thought if she just got into the single bed Austin would give in and move out…both of them were refusing to budge and after a lot of tears they both fell asleep and stayed together all night….

We set off for the airport in gorgeous sunshine, in fact it was so sunny the kids struggled to smile for my photo as we boarded the plane….

Austin fell asleep before we even took off!  Caitlin and Noah both made a start on their goody bags that I had made for the plane.  We got our transfer with no trouble and got to the hotel.  They couldn’t find our booking which was slightly worrying, but eventually discovered we were booked under Austin’s name!!!!  I’m not too sure how that happened but at least we did have a booking and it looked like a nice hotel which was good because we hadn’t paid a massive amount for it.  We headed up to the room where we discovered it only had 4 beds!!  Richard started to unpack as he wanted his flip-flops and when he opened the suitcase there was a strong smell of nail varnish….when I looked where I had packed the nail varnish I discovered 2 out of the 3 bottles had exploded…luckily I had double bagged them and it was all contained apart from the smell.  I then went to see if something could be done about our lack of beds.  They instantly found us a room with 5 beds and so we moved, dumped the bags and headed downstairs to test out our all-inclusive facilities!!

The kids tested out the “fresh” orange juice…which gave them very hard to remove moustaches!!!!!!!!!!!  We then had a quick bit to eat, watched a bit of the entertainment, which was Spanish dancers, and then went to bed as it was really late.  The next day we had breakfast and went for a wander before it got too hot.  We went in the direction we thought the beach was stopping off at a little playground on the way.  While the kids played Richard went to see if he could spot the beach but he couldn’t so we gave up and walked back up to the hotel via the town square….

We all had a swim in the pool in the afternoon, had tea and then got ready for the evening entertainment.  While we were in the bar/club Caitlin’s very wobbly tooth fell out!!!

She was very excited that the Spanish tooth fairy would be visiting and wrote her a note requesting a euro instead of a pound if possible!!

Nanny, Grandad and Amy came over to see Austin for his birthday so we had a little BBQ since the weather was so good.  The kids played in the paddling pool since it was still out…..

…while we waited and waited for the BBQ which took a very long time to cook!!!!!!!  We didn’t quite have enough charcoal left so it never really got hot enough!  Austin also opened a few more presents!!

It was so so hot…we thought it was brilliant but Austin came out in quite a bad heat rash!  We also had another cake for him…

But this time he was back to not liking cake and had more strawberries!!!!!!  We then went inside to finish off our packing ready for our holiday tomorrow!!!!!!!!!!

Today Austin turns three!!  That has gone so quickly…and then again I can’t remember him not being here!!  We started the day with some presents….. 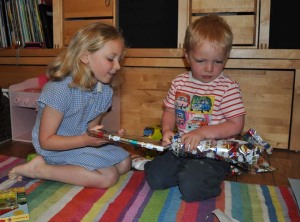 Caitlin and Noah had both picked out little presents for him…

….and he also got a scooter as his main present…. 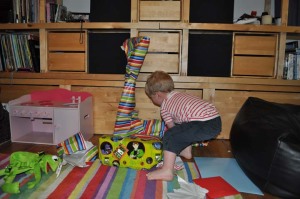 ….which he was desperate to get out on it!  The sun was shining so we went to a little park in the village for a quick scoot. 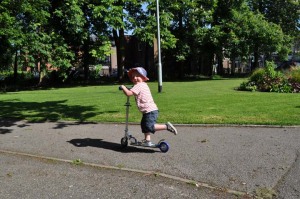 After the paddling pool we had a party lunch with Richard before he went to work.  We had a cake, although the candles refused to stay alight!!

As I’ve said before, Austin really doesn’t like cake and didn’t want any of this cake which was no surprise…so we didn’t cut it up instead we saved it to do candles with again when Caitlin and Noah got home…and he had some strawberries, his current favourite!

We then went to his swimming lesson and then picked the others up from school and headed back for their lesson!  After swimming we had chippy tea at Austin’s request and had the cake again!! 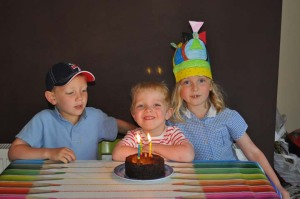 For some unknown reason Austin decided he did want some of the cake and ate a whole piece!!!!!! 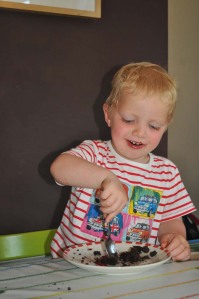 I think he enjoyed his birthday, well maybe apart from the swimming lesson which he isn’t really that keen on at the moment!!

The park in the sun….followed by a party

It was lovely and sunny so we went to the park with a few of Austin’s friends.  It was a little park right outside my friend’s house but we’ve never been to play there before.  It’s brilliant, small but plenty for little ones to play on…. 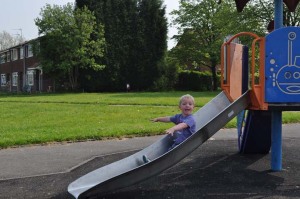 We stayed for ages, time just flew by!  I can’t believe how hot it was either…hopefully this means summer has arrived!!!!

Before we knew it, it was time to go home for some dinner and a snooze before school pickup and a party!!  Richard is still on lates so they all had to come with me again.  It was at a soft play so it was no problem, but it was about a million degrees in there!  They were all running around like lunatics…. 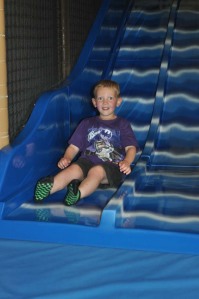 Caitlin and Austin spent ages with another sibling blocking the slide with big foam blocks ….. 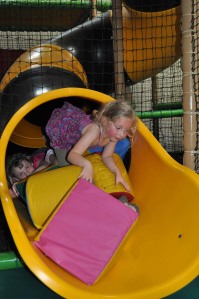 By the end of the party every child was just a massive sweaty mess…..

I take it in turns with Caitlin’s friend’s Nana to collect the girls from gymnastics.  This week wasn’t my turn but someone had mentioned they thought there was a little show for the parents.  I was almost convinced there wasn’t because I had asked their coach and he had said there wasn’t one until the end of term in July, but there was a bit of doubt in my mind.  Since we had to go out soon after gymnastics anyway to swimming I decided I would go for Caitlin….and I am so glad I did!!  There wasn’t a show, but they had had a competition and they were giving out certificates.

By now we had sneaked into the hall and were watching them get their certificates.  He did the older group first and the 3 that didn’t get a certificate got medals!  He moved onto the younger group and gradually they each got called out for their certificate.  There were less and less left and then he started on the medals, with Caitlin still not called up!  I was really really glad I’d decided to go and collect her because she got the silver medal!! 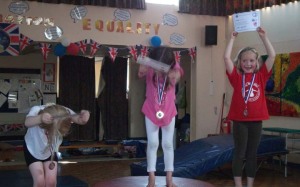 She was so proud, and so were we!  Austin got very excited when she got her medal and was clapping for ages!

She had mainly won her medal for including a backward roll in her routine because no-one else in her group can do one.  She also did a cart-wheel and some stretches….and it was good enough to get her 2nd place out of her age group.  It is great because it has really spurred her on to practise a bit more.

Caitlin was invited to a garden party to celebrate 25 years of the Rainbows, it was on the same day as London to Brighton so she asked Nanny if she could stay at theirs and go to the party.  On the Saturday Caitlin made an olympic torch for school…..

I was very impressed because she found some olympic pictures in a magazine that Nanny had and cut some out to stick on, and she included an olympic mini!!!!!!!  (3rd thing up on the above picture)  On the Sunday she went to the party and had a great time.  She played some games and made loads of things including this headband….

They all got a party bag and a badge to sew on their t-shirts.

3 kids and 6 and a half minis
Create a free website or blog at WordPress.com.