We got cheap tickets to go and see the ice hockey.  The ticket was for 2 adults and 3 children but under 5’s were free so we took Noah’s friend as our 3rd child!  Another family joined us as well, twins from Noah’s class, so we had 6 kids altogether.  While they were warming up we spotted a player called King which they all thought was very funny…shame he was playing for the opposition!! 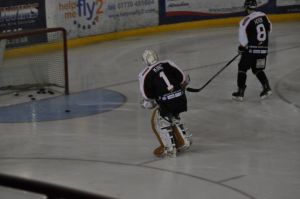 The 4 boys (Noah and his friends) sat in the row in front of us and were very funny!  It was as if they had been following the Manchester Phoenix ice hockey team for about 10 years!!  Every time they scored they went wild…. 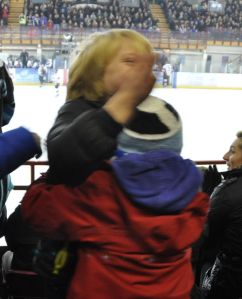 The game was actually really exciting and even Caitlin and Austin were really into it!  There were some long time supporters on the opposite side of the rink to us who had pretty much brought a band with them!!!!!!!!! 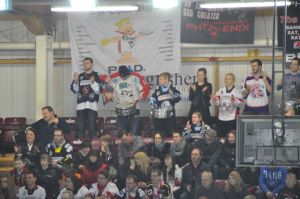 The time flew by and they all absolutely loved watching the game and Manchester Phoenix won!!!

Here’s a photo of Austin at the ice hockey…he had been wearing his hat and so his hair had gone all spiky which made him look really grown up!!!!!!