Caitlin went to a horse riding party today, I wasn’t completely convinced she would go on the horses…  She got all the kit on, but it was very very cold, they were all shivering! 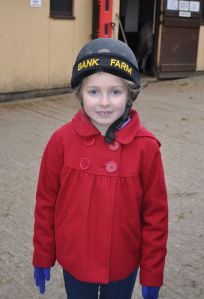 Amazingly she got on the horse and was actually quite good!  She rode around and even did some trotting, and then hands free trotting!  They all went in and out of some markers and were having a great time.  Austin had to come with us and about half way through shouted really loudly “when are they going to ride the horses cos this is just a practise isn’t it?”  The birthday girl’s mum and dad thought he was very funny!  After about 45 minutes Caitlin stopped smiling and started looking very pale…as she passed by I asked her what was wrong and she said she felt sick.  At the end of the lesson she was completely white and shaking a lot!!!!!  They all went to the party room and I thought she had just got too cold and that along with bouncing around on the horse for an hour had been too much.  She started eating her party food and then was almost sick!  Two others hadn’t turned up for the party due to a stomach bug so I began think she had that, by then it was the end of the party so we headed home.

We had promised to take Noah out for his tea since Richard had been working on Friday and not able to properly celebrate his birthday and then we had visitors last night we had planned to go out tonight so Noah picked McDonalds!!!!!!!!!!!  Caitlin had seemed better in the car  for the journey home where it was nice and warm, but then when we got home she had a warm bath and decided she didn’t want to go out for tea!!!!!  So I stayed home with her.  She wasn’t actually sick but still looked pale and said she didn’t feel well….

Noah had a great time at McDonalds and even had pudding!!!!!!!!!