Noah was invited to a go-karting party but since Richard was on lates I had to take Caitlin and Austin as well…  Noah had a great time karting and as usual was very competitive!!

This was one of the few photos I took where he wasn’t looking over his shoulder to check where the next person was…which usually resulted in him being overtaken!!  While they all had their party food the man in charge let all the siblings have a go on the karts which was really good of him.  Austin was in his element too!! 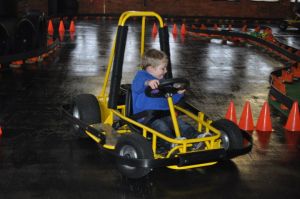 It was a fantastic party, shame Austin isn’t old enough for it…he would be fine on the karts but think there might be too many who couldn’t manage it in his class.