Tonight was the Children in Need disco at school.  Caitlin was very excited and had been planning her outfit and hair and nails for weeks!  She wanted curly hair again like she had for Nan’s birthday so we did that and then painted her nails, she looked so grown up!  Noah decided he was wearing his shirt and tie.  Very worryingly as Noah set of he said he was going to give out his phone number and then promptly recited my mobile number!!!!!!  I didn’t even know he knew it!!  I wrote it down on his place mat at the restaurant on Wednesday and that was it!!!  He must have learnt it during tea! 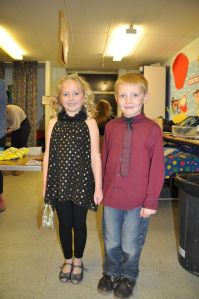 The highlight of Noah’s night was that I gave them both some money to buy some snacks with!  Noah had a great time buying sweets and sitting eating them with his friend!! 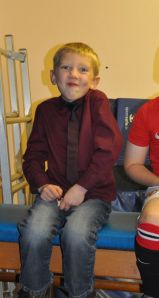 The DJ was giving out prizes throughout the disco and Noah won a glow bracelet.  I was just feeling really sorry for Caitlin when near the end she won a trophy and some sweets for good dancing….

She was over the moon!! After the disco she took it home and showed Austin where I managed to get a quite nice photo of the three of them…. 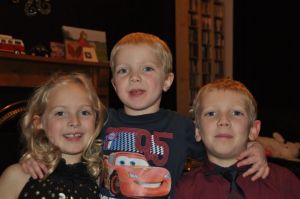 They loved going to the disco, next year Austin will be able to go too!!!