Today we were supposed to be going camping in Alfie with our friends!!  The weather is very cold and keeps raining on and off!!!  Our friends van has a coolant leak so they decided not to go…we couldn’t decide what to do….we had a great time last year.  In the end we decided that what made it good last year was the fact we went as a group…there were 3 families last year, so we decided not to go.  Instead we went to Santa Pod for the firework frenzy.  We got there just in time to see the bonfire being lit by a jet engine!!!

After the bonfire there was a chance to go on a monster truck ride which looked really cool, but Caitlin and Austin didn’t want to go on so I took them up towards the track to watch Noah go on it.

It looked brilliant, but I still couldn’t persuade them to go on!  Just as Noah got off, the jet car went down the strip.  Noah heard its engine and ran toward the strip through a massive puddle and completely soaked his feet!  He missed the jet beetle but did manage to see the stunt bikes…. 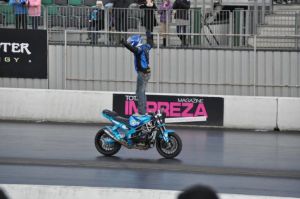 Caitlin and Austin then went on the trampolines and bouncy castle instead of the monster truck.  On the way over Caitlin walked through the same massive puddle and completely soaked her feet too!!  While they were bouncing I went on the monster truck ride…it was fantastic!!!  Caitlin and Noah were freezing with their wet feet so I took them to stand by the bonfire to warm up while Richard went to get more layers from the car.  Next up was a hotdog tea while watching Terry Grant (the stunt driver who drives 3 cars at a time), the kids have seen him a few times now and knew what he was going to do!  Richard forgot their extra jumpers and Noah especially was shivering more and more and neither him or Caitlin could eat their hotdogs!  I put my coat around them both but they weren’t warming up so part way through watching the jet beetle drive around we had to give in and go back to the car!  The jet beetle was pretty good, it was managing to drive around in a tiny space….in the dark!! 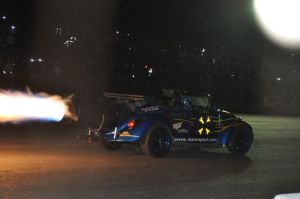 The fireworks went off as we walked back towards the car so we kind of got to see them.  Once they were in the car with their wet shoes & socks off they warmed up and all fell asleep on the way home!