My Dad came over to put a cowl on the chimney from Caitlin’s bedroom to prevent the birds coming back and re-establishing their nest!!  Noah got wind of the fact my Dad was going up on the roof and desperately wanted to go up too!  I thought he would get scared so I said he could go as far up the ladder as he dared…  He got almost half way before I realised he wasn’t going to get scared and so I stopped him! 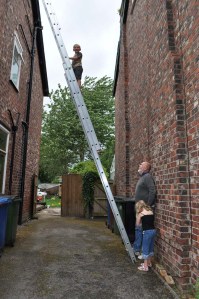 Caitlin also amazed me and went as high as Noah!!!!!

Austin of course wanted to join in!  And his face was a picture when we said he could…he looked so pleased with himself!!!

He also got quite high, and was willing to go further, but we wouldn’t let him as he kept leaning off to talk to us!!

The cowl got fitted, once the kids had stopped messing on the ladder!!!  So fingers crossed Caitlin won’t have any more visitors in her room!