I’d heard about Kiddy Karts days from a friend so we went along with a few other friends.  I expected loads of queues for the karts but the most they had to wait was 10 minutes and that was rare it was usually straightaway or a few minutes. 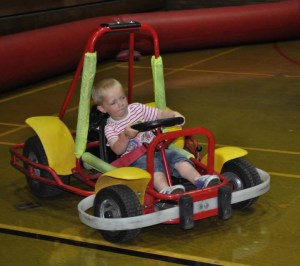 Austin had never been on one before and I wasn’t sure if he’d be able to steer, but he got it straight away and was actually really good at it!  Noah had one go on the 3 to 6 year track and then the person in charge said he would be better on the older kids track as he was also pretty good.  So he was very pleased and went off to the bigger (and faster) track!!

As well as the karts there were trampolines…..

Although Austin wouldn’t g on those for some reason!!  We then stopped and went outside for a picnic….

After lunch we went back in and Noah tried some zorbing…..

Austin did more karting (and a bit of bouncy castle and slide playing)…. 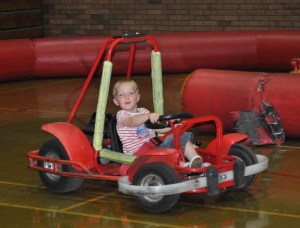 …and they had a go on the dance mats!!

They had a great day playing on all the things.  Austin was obsessed by the karts and I was stunned at how good he was, as was the man in charge!!  He had to help most of the other 3 year olds but Austin got it straight away!!