It always amazes me how good the Torkington Park fun day is!!  And that it is (almost) free!!!  Last year Noah won a prize on the passport competition where you have to get your passport stamped as you complete each activity so as soon as we arrived we picked up a passport and I couldn’t believe it when I spotted Caitlin and Austin in the main photo which must have been a random photo taken last year!!  The first thing they tried was making a ceiling rose out of clay….

…then they moved onto hook a duck which was one of the expensive parts of the day at 20p per child!!!!!!  Then onto some colouring and to meet a tortoise…

….then there was more playing with clay.  I’m not too sure what they were supposed to be making, but it was a plate with pasta, lentils and beans stuck into clay!  They had fun, even if it did grow mould before it dried!! 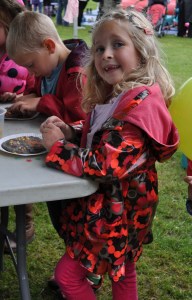 They then visited the change 4 life stand where they got some free games to play at home and some free fruit.  After eating that they made some musical shakers, badges, more colouring, fabric pictures, obstacle courses and leaf decorating….

…We then stopped for our picnic.  We managed to time it really well because it started raining so we sat under a tree which was just about enough shelter to stop us getting wet.  Once we’d finished our picnic the rain had stopped so we explored the other side of the park where they all made Olympic torches….

Austin had finished his torch in about 3 seconds so he went off to play in a little ball pool….

It was starting to get late so some of the people we were with headed home while we planted some cress seeds and had a play on a soft play set up.  Austin stayed in the soft play while Caitlin and Noah went to the circus school, then they all went to join in the hay fight…. 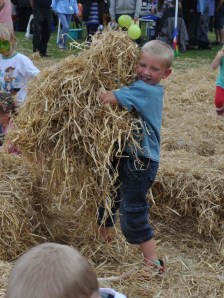 I think this bit is their favourite bit…they remembered this bit from last year too!!

After a while it started to rain again, only lightly but since it was so late we decided to set off home and within about 10 minutes it was torrential rain!!!!!!!  The kids had a fantastic day with loads of friends, I really hope it’s on again next year!!