Today it was the school fair at the little school Austin will go to nursery at.  He got his letter recently to say he had got a place so I thought it would be good for him to go since he hasn’t been for a year.  The weather wasn’t great but Richard was frantically trying to get Alfie back together so we can go away in him next weekend so we left him behind while we went to the fair….

There was loads to do at the fair, it is a tiny school but they have a great fair.  We had given them all £2 to spend…Noah loved taking target practice at one of the Dad’s….

The Dad didn’t manage to save the goal and so he won some sweets!  They did hook a duck and won sweets, guessed where the treasure was in the sandpit and got a sweet for entering, bought a cake, played in the playground and Caitlin decorated a little box to match the one she did last year…

They also had a go on the tombola where Caitlin won a big bag of sweets and Austin won a colouring book.  The teacher in charge of the tombola then made sure Noah won one too and he got a book.  At the end of the fair they reduced the price of the adult tombola so I gave them all some money to see if they could win me and Richard a bottle or 2!!!  Caitlin won some bath salts and Noah won……..I still can not believe that someone donated this to the fair….. 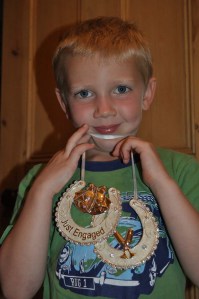 ….a “Just Engaged” sign!!!!!!!!!!!!  Even more weirdly Noah loved it and now has it hung on his door!!!!!!!!!!!!!!!  I have never ever seen such a bizarre prize at a school event, they did have quite a few odd/rubbish prizes and Noah’s gave them all a good laugh!!  Austin had a great time looking around the school but is still insistent he isn’t going!