Finally a day of peace…..followed by another day out.

Finally after not stopping since our holiday we had a few days of no real plans…..which was great as we got to unpack finally, and catch up on the washing!!  On the Thursday Caitlin was invited out for her friend’s birthday which she really enjoyed.

On the Friday we were back out really early again, over to see Nanny and Grandad.  We had a mad action packed day!!  It was pouring with rain but we still headed off into Liverpool.  We went up St John’s Beacon which I have been meaning to take them up for ages.

It would have been better if it had been a nice sunny day, but never mind!  They still loved being able to see right across the city….. 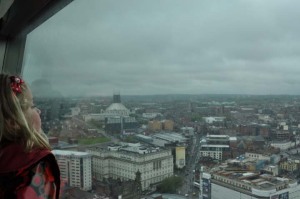 After the tower we went to the museum to the planetarium. 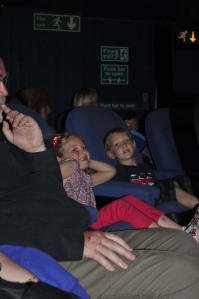 I have to say the planetarium was a bit of a let down.  The film was projected up onto the domed ceiling but it had a definite direction and to view it properly we really needed to have been sitting on the opposite side of the circular seating.  After the planetarium we finished off the duck trail that we had started when we went to book our tickets.

We also sponsored a duck in the charity duck race.  They were issuing randomly named ducks to people and  Caitlin got Lucy, Noah got Eddie…which is just bizarre as Eddie and Lucy are really good friends of ours….hopefully that is a lucky omen!!!