We set off for the airport in gorgeous sunshine, in fact it was so sunny the kids struggled to smile for my photo as we boarded the plane…. 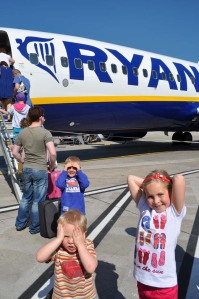 Austin fell asleep before we even took off!  Caitlin and Noah both made a start on their goody bags that I had made for the plane.  We got our transfer with no trouble and got to the hotel.  They couldn’t find our booking which was slightly worrying, but eventually discovered we were booked under Austin’s name!!!!  I’m not too sure how that happened but at least we did have a booking and it looked like a nice hotel which was good because we hadn’t paid a massive amount for it.  We headed up to the room where we discovered it only had 4 beds!!  Richard started to unpack as he wanted his flip-flops and when he opened the suitcase there was a strong smell of nail varnish….when I looked where I had packed the nail varnish I discovered 2 out of the 3 bottles had exploded…luckily I had double bagged them and it was all contained apart from the smell.  I then went to see if something could be done about our lack of beds.  They instantly found us a room with 5 beds and so we moved, dumped the bags and headed downstairs to test out our all-inclusive facilities!! 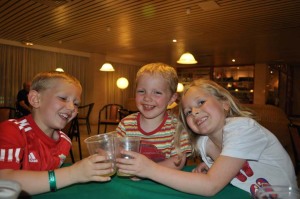 The kids tested out the “fresh” orange juice…which gave them very hard to remove moustaches!!!!!!!!!!!  We then had a quick bit to eat, watched a bit of the entertainment, which was Spanish dancers, and then went to bed as it was really late.  The next day we had breakfast and went for a wander before it got too hot.  We went in the direction we thought the beach was stopping off at a little playground on the way.  While the kids played Richard went to see if he could spot the beach but he couldn’t so we gave up and walked back up to the hotel via the town square…. 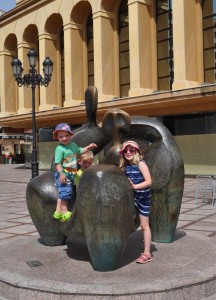 We all had a swim in the pool in the afternoon, had tea and then got ready for the evening entertainment.  While we were in the bar/club Caitlin’s very wobbly tooth fell out!!! 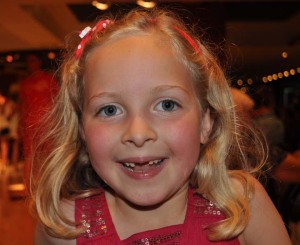 She was very excited that the Spanish tooth fairy would be visiting and wrote her a note requesting a euro instead of a pound if possible!!