I take it in turns with Caitlin’s friend’s Nana to collect the girls from gymnastics.  This week wasn’t my turn but someone had mentioned they thought there was a little show for the parents.  I was almost convinced there wasn’t because I had asked their coach and he had said there wasn’t one until the end of term in July, but there was a bit of doubt in my mind.  Since we had to go out soon after gymnastics anyway to swimming I decided I would go for Caitlin….and I am so glad I did!!  There wasn’t a show, but they had had a competition and they were giving out certificates.

By now we had sneaked into the hall and were watching them get their certificates.  He did the older group first and the 3 that didn’t get a certificate got medals!  He moved onto the younger group and gradually they each got called out for their certificate.  There were less and less left and then he started on the medals, with Caitlin still not called up!  I was really really glad I’d decided to go and collect her because she got the silver medal!!

She was so proud, and so were we!  Austin got very excited when she got her medal and was clapping for ages! 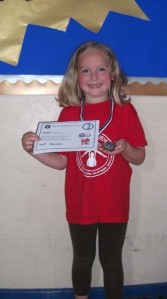 She had mainly won her medal for including a backward roll in her routine because no-one else in her group can do one.  She also did a cart-wheel and some stretches….and it was good enough to get her 2nd place out of her age group.  It is great because it has really spurred her on to practise a bit more.