Caitlin was invited to a garden party to celebrate 25 years of the Rainbows, it was on the same day as London to Brighton so she asked Nanny if she could stay at theirs and go to the party.  On the Saturday Caitlin made an olympic torch for school….. 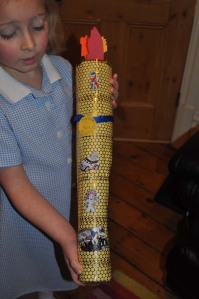 I was very impressed because she found some olympic pictures in a magazine that Nanny had and cut some out to stick on, and she included an olympic mini!!!!!!!  (3rd thing up on the above picture)  On the Sunday she went to the party and had a great time.  She played some games and made loads of things including this headband…. 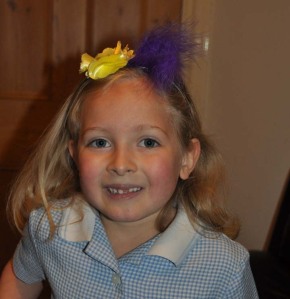 They all got a party bag and a badge to sew on their t-shirts.