After church parade we rushed home, made some party food and went to a different church hall for Austin’s 3rd birthday party.  While he waited for his friends to arrive Austin sat having a chat with Nan!!  I love this picture, he looks so grown up!!

We didn’t bother with an entertainer, I figured since Austin is only 3, and his friends are around that too, they would be happy just running around with some toys.  I borrowed the playgroup toys so there were plenty of bikes and cars to play on and a slide…. 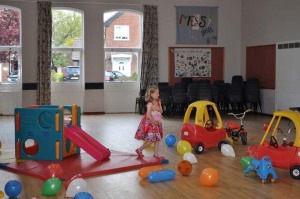 …and a bubble machine…..

The bubble machine was great at first then the floor started getting slippy and they all started falling over!  Then I had the great idea of playing with a parachute with loads of balls….the balls stayed on for a maximum of 2 seconds!!!!!  The kids loved it, but we gave up putting the balls back on very quickly!!!!

Noah’s best friend also came because his sister is one of Austin’s friends…they really encourage each other and it wasn’t long before they were racing around balanced on top of a car….

…they had a brilliant time!  Austin doesn’t like cake but I insisted he had a cake to put candles in….he got really upset at first but then finally understood he didn’t have to eat any!!  Of course we had one of our mad candles!!!!!!!!!

He looked scared to death of the candle!  His Godmother thinks that’s why he doesn’t like cake…maybe??!!  He had a brilliant day with all of his friends and had loads of ace presents.